Efficiency is the key. The more efficiently resources are used, the more profitable an operation becomes, the more it is sustainable.

One of the easiest ways to increase efficiency is to improve pastures. Interseeding legumes has penciled to be one of the best investments an operation can make, in my experience. The hardest part of this, for us, has been finding someone with the equipment. There are lots of people that do custom farming in our area, but only one has a no till drill. 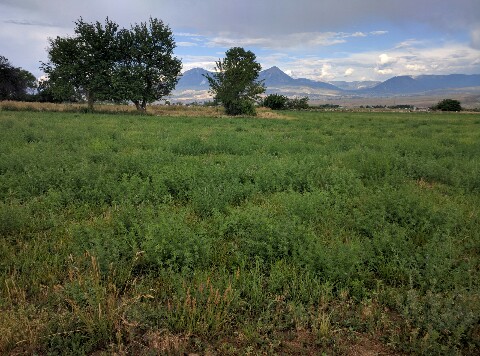 Multiple species of grass with alfalfa and clover pasture.

I have a really hard time making equipment purchases pencil and have found it much more economical to hire work done. It has it’s drawbacks, like anything, but the loss that would be incurred if we laid out the capital to purchase the equipment would just be too great. I’ll deal with the drawbacks.

The cool thing about interseeding legumes is that it’s the “gift that keeps giving.” You only have to plant once. If managed properly, the legumes will never go away. In theory, a monoculture stand of alfalfa will last an average of seven years. I say in theory, because I have seen stands that lasted less than three years! That’s some expensive alfalfa!

We have alfalfa and clover on one of our leases that has not been mechanically reseeded in more than 45 years (some pictures on the post: Forage Diversity). Talk about great return. There have been years we cut early, took all that young alfalfa full of protein and put it in hay (which we fed on the same ground); other years we let the alfalfa and clover go to seed, grazed it, and let it reseed itself.

Last week I pointed out how individual performance/efficiency translated to measuring operational efficiency for profitability and sustainability. Improving pastures gives cows better forage, higher nutrition, on less ground. This translates to less ground needed per cow. That means if you are running 10 on 100 acres–10 acres per cow–and improve the pasture so you are able to run 15 cows on the same 100 acres–about 6.7 acres per cow–you are more efficiently using the ground. How much more profitable would the operation be with 50% *more* calves to sell?

Interseeding, improving pastures uses the current land resource, allows it to be used more efficiently–increases production without increases the base resource, land. The cost of seed and putting it, added to the loss of the use of ground for the year (don’t put cows on new seeding until it is established–a year) would be the total investment of the improvement. The return on investment would increase as the years went by. Instead of the improvement lasting 7 years–or less–it could last forever!