As I pointed out last Saturday in the Cow Cow Ranch Happening post on July 30, 2016, it’s cheaper to buy hay than to make it this year. I had figured that out back in April, when I was spending 8-12 hours a day just on the west field at Winchester’s. “If we didn’t need the pasture, we’d buy hay!”

Talking to Kendalls the other day–they do our custom hay, plus they have fields they take hay off of and sell the hay–and they were going to “try” to get $60/bale. Their bales average 1,300 pounds. That’s pretty darn cheap! 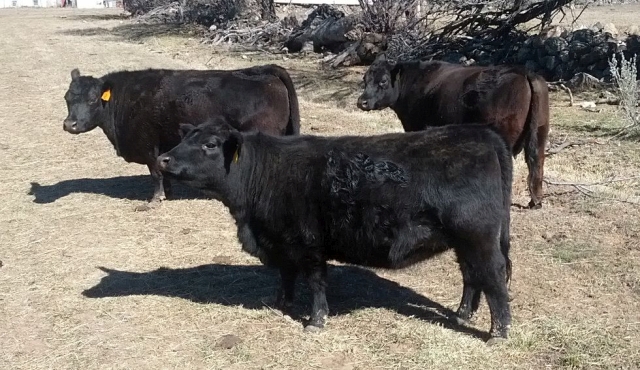 These girls will stay fat and sassy like this splitting 100 lb./day dry matter between them.

Here’s the costs we put into that property to get 16.5 bales of hay. 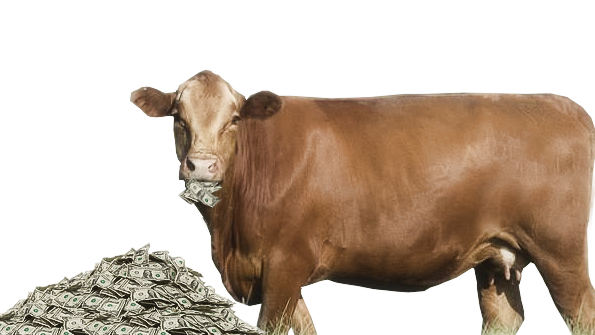 Had this graphic made a while back, and it is oh-so-true. Except we have black cows. Thankfully our girls don’t eat as much as most cows–very efficient cows–but still, for how much this hay cost…

And that’s not including the cost for raking, or the time spent irrigating, laying and pulling pipe, or the fuel to go there twice a day, the tractor work we did down there–and having the road the tractor there and back–or the fuel to pick the hay up out of the field and haul it to the house.

Now the last would probably have to be incurred if we bought hay anyway, since we’d have to go pick it up. Still, this has been some expensive hay! And it’s not even “good” hay! It’s mostly weeds and fox tail, so we’re going to feed it here at the house, where nothing grows anyway, so the foxtail seeds (which all of it went to seed) won’t get into our good hay/pasture ground.

Laying pipe and pulling pipe took 4 hours per time, with both me and Jeramie–that’s two people, 4 hours each. That is 16 hours of laying and pulling pipe. Irrigating took stopping twice a day and taking a minimum of 20 minutes per stop.

Granted, the ground was in really rough shape and we knew that it wasn’t going to be the best hay. After we signed the lease, we seriously questioned our sanity. It was a gamble, and if we could have got the lease again next year, and extended it for more than a year-to-year, we would have been good. As it is….not good.

So here’s the ironic part: Gayle had the upper field interseeded with alfalfa and clover. This was a lot of legwork on my part, since I had to find the only guy in the county with a no-till drill, and get him lined up to do it. Of course Gayle claims that the guy sat on the tractor for a hour and a half that she got billed for that the tractor wasn’t moving… I didn’t even get into that. But the field is interseeded, and was doing good, but with us having to go in so early to take the cutting, the seeding is probably going to die. The new owners are going to put 5 horses out there and kill it anyway… Frustrating and sad, really, since we accomplished so much in one season.

As to hay, some people may say that it wouldn’t be so bad if we owned our own equipment, but these people obviously don’t know the costs involved in haying equipment. The capital cost alone is staggering, and then with the breakdowns….I’ll skip that nightmare!

Maybe someday–boy, winter is going to be busy now–I’ll research the prices of hay and figure out how many years it pays to raise our own hay and when it isn’t worth it. Could be rather enlightening. Can’t count our time, but I sure as heck can count fuel!

What are hay prices doing in your neck of the woods? When you do bale price, please be sure to include how much an average bale weighs. When I moved to California, I remember thinking “$7 for a small square? That’s outrageous!” Then I got them and they were 3-strand and weighed about 135, double the the size of the Colorado small squares I’d been paying half as much for. $35/bale sounds great for a large round, until I find out they are 4×4 and weigh 600-800 pounds. Same with large squares, big difference between 3×3 and 4×4.

By the way, anyone love the 3×3 as much as I do? I can “man handle” the flakes, and the bales stack so pretty! Turns out you can fit a lot more tonage on a semi, too, than any other bales. But how about the prices of those balers?! Wowza.

I think that letting the cows harvest the hay could just be the way to go. Have to see what happens with Winchester next year, since we have the water issue there, and he has said no animals allowed until irrigation water is turned off. Have to see.