Cow Cow Ranch was started in 2003 by Jeramie when he purchased 40 cows and a bull. In January 2005 he purchased Power, our senior herdsire, at the National Western Stock Show, in Denver. 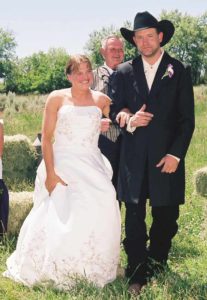 I, Randi, met Jeramie in early 2007 while working at a friend’s feed store. At the time, I was also working at a real estate office, where Jer happened to have his house listed for sale. My boss set us up–unbeknownst to me–on a lunch date a week after we’d met at the feed store. At lunch he invited me to come see his cows and that was all she wrote. We pretty much spent every evening together after that, meeting at the pasture when we got off work.

We were married on June 14, 2008, in the cow pasture; and the reception was in a friend’s barn. The wedding cake was a barn and pastures with ceramic black cows that resembled our’s (complete with chocolate cow pies, compliments of my sister, Billie). Our world revolves around cows. 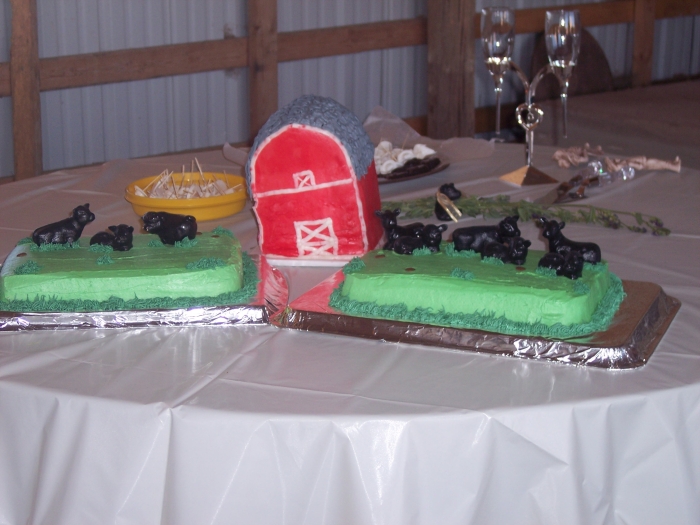 It was 103 degrees, the barn cake looked more like a tornado hit it by the time the picture was taken. 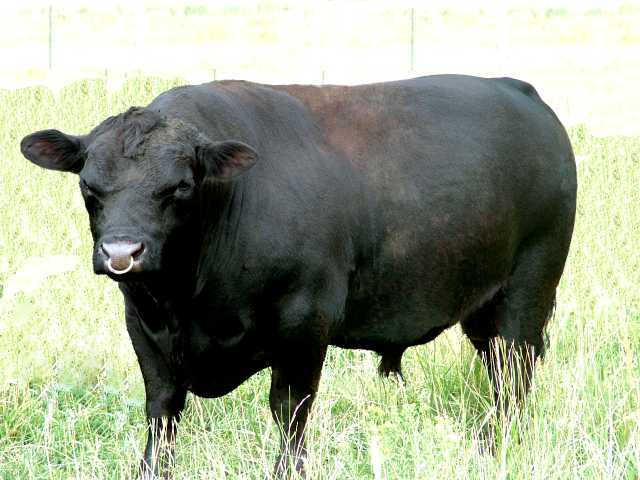 Power on July 19, 2007. The figurine closest the barn on the pasture cake on the left was to represent Power, complete with the ring in his nose.

Most everything in our lives is somehow influenced by the ranch (cows), and therefore our family and other things will be included on this blog/site because everything is intertwined.

We have four children: Nick (boy, age 8), Charlie (girl, age 7), Marion (boy, age 5), and Rosie (girl, age 4), born within 5 years, no twins. Jer also has a daughter, Molly (age 20), who is now in her second year of college. Molly lives in Iowa, wants to be a math teacher, is an accomplished ballet dancer, and competes in beauty pageants–will compete again this year for Miss Iowa; she has a great boyfriend named Sheldon. 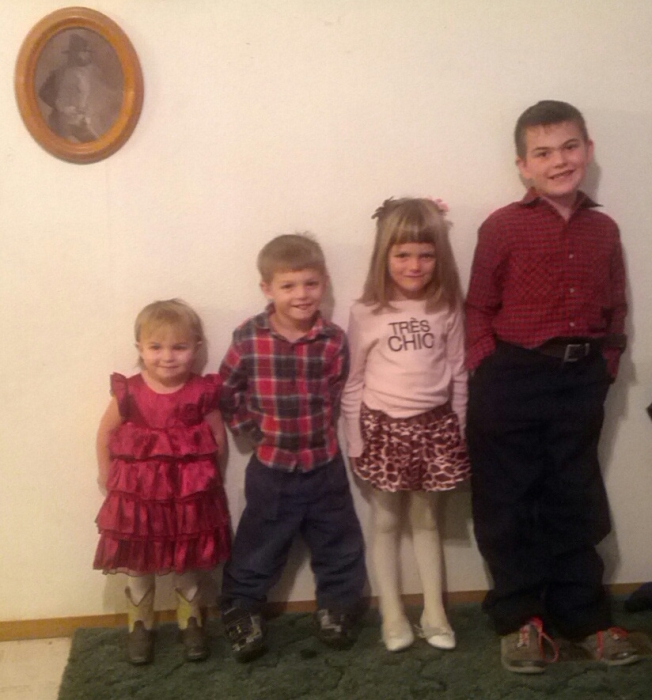 The kids in December 2014, ready to go to the school Christmas program. Left to right: Rosie, Marion,Charlie, and Nick.

Along with the human kids, we have two cats, Robin (outside cat that is highly respected because of her hunting prowess) and Kitty (indoor cat that is not my favorite); and an Australian Shepherd/Australian Cattle Dog/Mutt named Lily.

Our cows are Aberdeen Angus and Aberdeen Angus cross (we call them “percentage”). Our cows are selectively bred to be efficient on grass: more pounds of beef per acre. We are known in town as “the people with the little cows.” Our females average 1,000 pounds. The *average* cow in the US weighs 1,300 pounds, meaning many are over 1,300. The females range in height from 43″ to 48″ at the hip/rump height.

Jer’s original herd was comprised of large cows. When we sold them, they ranged from 1,300 to 1,800! My favorite (#12) was 1,610 pounds and another favorite (Maggie) weighed 1,700! Those girls ate *a lot*! We have daughters out of both #12 and Maggie that we bred and developed. The daughters are smaller than their dams, eat less, but wean off calves that are comparable. This is the whole idea of Cow Cow Ranch: to breed and develop cows that eat half as much, but wean off calves that are worth just as much as calves from larger cows.

Beef on the dinner plate is actually a by-product, but still an important aspect. We sell beef directly to consumers, and are working on developing relationships with some boutique restaurants and chefs. A restaurant in Laguna Beach, California, did a blind tasting of our beef against a renowned grassfed beef from San Diego and all the foodies preferred our beef; the chef and a food critic did write-ups–I’ll share those.

If you are interested in purchasing semen, embryos, breeding females, bulls, or beef, email us at ranching@cowcowranch.com or give me a call (970) 589-5158.