And what does that mean anyway?!

What the heck is a moderate Frame cow?

Reiterating: “Moderate” is a relative and subjective term.

In Extreme Cattle Ranching, I clarified how there are things to be extreme in and things that should be “moderate.” Moderate, in talking about cattle genetic traits, could be taken to mean median, but there again it is still a relative term.

I’ll discuss milk in another post, but do want to touch on it here briefly, as it applies to this post, too (Maybe I should just do a big ‘ol long post on “The Meaning of Moderate”! Easier to break it down in different posts, more understandable and precise).

Milk. Moderate. Compared to what? How many beef cows really need more milk? We had an Angus cow we called Grandma. She ended up going to a friend and they milked her, after her calf died because it couldn’t get on her big teats—I named the calf Narco because he fell asleep every time I got a nipple in his mouth, he was just too far gone by the time I started trying to bottle feed him. Anyway, they were getting 4 gallons in the morning and 4 gallons at night milking Grandma!! She was total Angus, not a cross. She had just freshened! What newborn calf needs—or can even consume—8 gallons of milk a day?!

So on to frame size.

So what is a “moderate” frame cow? I guess it depends on the breed. A moderate Simmental is going to be a different height than a moderate Hereford. At least I would think so….hope so!

Here’s what I do know, from my personal experience: Short cows hold their condition better—easier—than taller cows. Some call the shorter cows that hold their condition easily, “easy keepers,” some say “easy fleshing.” I call them “fat girls.” For the tall, harder-keeping cows, I blame the legs. “Those legs sure are pretty, but, man, they’re expensive to feed!” And when I say short, I’m not talking 50” cows. I’m talking short girls, 43”-48”. Even the cows at the upper end of that spectrum are noticeably lower in inherent body condition.

So what’s the big deal? So what that it takes a little more feed to keep a taller cow in the same condition score as a shorter cow? Nothing, I guess. Unless you are trying to maximize production and profit with the resources available. If you are trying to do that, then there is a big problem with the taller cow.

First, possibly to be addressed is WHY should the taller cow be kept in the same body condition. This is a whole post in itself, but the short version is that cows kept in 6 body condition score are more likely to breed on time, maintain their condition, stay healthy, and produce a healthy calf. 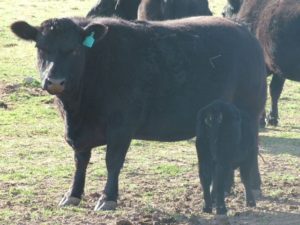 916 in March 2007, with her heifer calf, Chunk, that is now a producing cow–pregnant with her 8th calf while nursing her 7th. 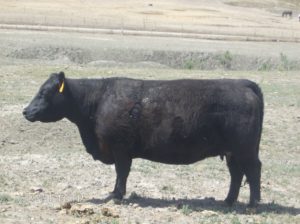 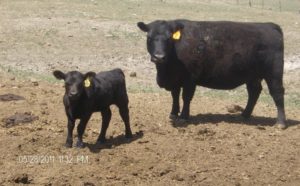 The neat thing about the 46” 1,200-pound cows is that it’s not that they eat you out of house and home. 916 could have ate a flake a day and kept that condition. We say they can live on dirt. We didn’t ever push her, but I’ve pushed some of our CCR cows (will have to do a post on it) and was really pleased with the results.

At Cow Cow Ranch, our cows average around 1,000 lb. They range in height from _____ to _____. The short girls just hold their condition easier. They are fat. Too fat by some people’s standards—we’ve been told more than once that our cows were too fat and weren’t going to breed…they breed every year, on time.

Now where we get into the too small, because we are there, is our fullbloods. The drawback of a “cow maker” bull for us is that they shrink everything. That includes other fullbloods, so we have to be really careful in how small we end up. Great cows, just need some more size—which is really funny (ironic) coming from the “people with the little cows.”

These two fullbloods, Lilly and Princess, pictured below are only 41.5″ and 43″ rump height, respectively. (And in looking up those rump heights had a very enlightening moment about our herd, my preferences, etc. Will have to do a post about it. Maybe as part of this series, since it relates to the cows, size, build/type, etc.). 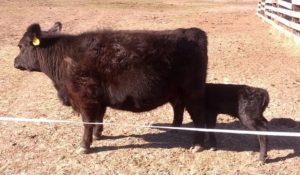 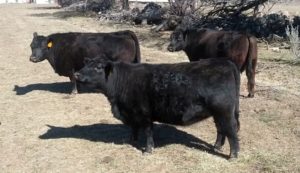 Ok, so I can’t wait completely for another post. Here’s what I discovered. When I sorted the Excel sheet that I have the linear measurements for our cows on by rump height, Chunk is also 43.” So why is Princess “too small” and Chunk is “ideal” for us? It has to do with thickness, girths, etc. I’ll do another post on it.

There are practical reasons to have the cows have some size on them.

Bull selection, or worrying about the neighbor’s bull, could be one. But I’ve seen a miniature Hereford cow have a calf unassisted out of a SimmAngus bull (that threw calves large enough to kill SimmAngus cows).

Worrying about the neighbor’s bull is not a reason to have bigger cows and be less productive and profitable. What are you going to do if the neighbor decides to get a 3,000 lb. Simmental bull or Piedmontese? Change your whole plan? Can’t be worrying about the neighbors, put up the best fence you can and get the BB gun ready (just kidding). Seriously, though, just have to do your best to keep the neighbor bulls out of your pasture. Maybe get uglier–smaller—cows and the bulls won’t find your herd so attractive.

As far as selecting your own bull: there are plenty of bulls out there to choose from, with plenty of good information on them to be able to make a sane, rational decision. Besides, if you get one and don’t like him, there’s always next year.

**I do not advocate changing bulls every two or three years, like most producers I know practice. Of course, they are replacing the bull because they don’t want to breed father to daughter (although there are other reasons such as “he’s too big”). If they would buy their heifers as bred, instead of raising replacements…but I digress and that is another post. And the advantages of older bulls is another post, too.**

So back to practical reasons for cow size:

A little size on a cow—we’re talking 44”-48” is a good range—let’s her have an easier time having a little bit larger calf. Not saying monsters, like our 1,000-lb. cow having a 92-lb. calf—unassisted, but still! Poor cow! But a larger calf as in 75-80 lb. A larger birth weight does give a higher weaning weight. As shown in But She’s A Good Cow, it could be the only real difference between weaning weights of calves from a certain cow. Either way, calving problems are expensive, so a producer that sells at weaning wants to have the largest calf they can without problems. 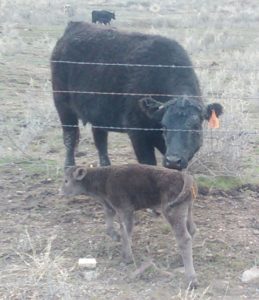 CCR cow, Thursday, with her calf Teddy when he was 2 days old. Teddy was a “regular” 75-pound calf. Thursday’s calf last year was 92 pounds! She had the calf last year unassisted. Thursday is 47.5″ rump height.

Everything between birth and weaning, I can’t think of a practical reason for more size on a cow.

Going over to the calf side of things: Have a little size on the cow makes for a larger calf. This is important because everything is by the pound. Especially when getting to the harvest part, where the numbers really start getting crunched by how many sellable pounds there are in the freezer.

On a FB thread, someone said it was cheaper to butcher a Jersey because they were smaller. Depends on how you calculate. Sure, the overall cash may be less, but the meat in the freezer will be less, too.

As I pointed out on the thread: All processors that I know charge a flat kill fee by type of animal. So if a beef is $50 kill fee, then it doesn’t matter if it is a 380 lb heifer or 1,400 lb steer. You will pay $50 for that animal to be killed, skinned, gutted, and hung. It takes the same amount of time, regardless of the size of the animal (except some of the larger bulls and cows. When I worked at a small locker plant one time, some wild—literally—bulls got out of the sale barn and got down in town. The Sheriff ended up shooting them and we were called down to see if we could process them. Our equipment just wasn’t big enough to deal with them, they were over 2,000 lb each).

But this is key. Are you paying attention? I will bold, italic, and underline. It’s important to get this point… The reason that packers like larger animals is because it is more pounds to spread their kill costs over. In other words, the larger the animal, the less per pound that packer has to get when they sell to break even and start being profitable sooner.

Example: These aren’t real numbers, I don’t know what packers costs are, but they are going to be less than a locker plant/custom processor. If it costs $50 for a packer to get 250 pounds of sellable product, that is $0.20/lb that is just to break even. If that same $50 gets 350 pounds of sellable meat, the price per pound to breakeven on kill costs is reduced to $0.14/lb. When you are talking about 100,000s pounds, that’s some serious money to be getting. The difference is $0.06, for 100,000 the packer would have to get an extra $6,000 just to break even.

Not all cattlemen—sadly, too few—are businessmen. This is the cattle BUSINESS. This is what the business looks like.

Ok, soapbox, tangent…I did it again.

One more thing: If you are a farm-to-fork (which I like that term best, it’s cuter to say and has two f’s), then having a little more weight in the freezer reduces your costs, just like the packer. Farm-to-fork people can more easily justify adding that extra $0.06/lb. onto their price, though, and be able to explain it in terms that Joe Public can understand—and if Joe can’t understand, they don’t need to eat your beef anyway! Although, beef does build brain cells….Not sure if there is help for someone that doesn’t understand costs associated with something. Here’s the solution for those Joe’s that can’t understand: “You want to pay Walmart prices, go get your beef at Walmart.”

So the final part of the cow size: When you cull her, she will bring more. Again, killer buyers buy off weight. And let me tell you, you take a 43” – 48” cow that weights 1,200 lb to the auction for beef…sit back and watch the buyers drool and fight. It gets crazy! They want those short fat girls! They’ll take tall fat girls, but I don’t know many people that can afford to make tall fat girls.

So, the whole post results in: Moderate, to me, is 43” – 48”. Even my bulls I like the same height as my cows, but the bulls have to be more masculine (another post). Short, to some, is moderate to me. 43” – 48”, can still have a “normal” calf—and have monsters without problems, but I will still never recommend that!!